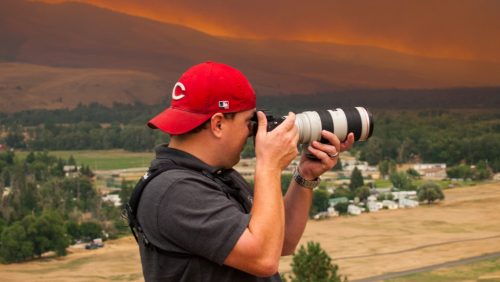 RL Miller (Rob) is a Spokane-based Commercial Photographer specializing in Architectural and Commercial Photography as well as Google Business and 360° Virtual Tours for Real Estate Marketing and Businesses. Rob also operates one of the leading Aerial Cinematography brands in the Northwest, Spokane Drone Photography as well as a filmmaking website called Spokane Films and a professional recording studio called Spokane Productions in Liberty Lake.

Printing his first pictures from a 35mm film camera that was given to him as a child began a love for “capturing time” via photography. He comes from a creative family and many of his relatives are craftsmen, artists, photographers, and distinguished professionals in their respective industries.

Having previously built and installed cabinetry in high-end homes in Western Montana, that skill helped refine and eye for symmetry and architectural lines. What began as a part-time project photographing kitchens for a designer is now a full time passion for countless clients all over the United States.

Born and raised in “Butte, America“, Rob then studied and graduated from the University of Montana with a Computer Technology degree in 2005 and became the “Director of I.T.” for a small company before moving into full time photography and business ownership.

He started a Photography company in Missoula, Montana, in 2008 and then moved to Spokane, Washington in 2010. He now travels all over the country capturing images and video content for clients and friends. Rob is constantly investing in new technology and continuing to further his education in order to make his work stand out from the crowd.

In addition to being featured in numerous portfolios and websites for clients, his work has also been featured prominently in Spokane CDA Living, Drone 360 Magazine, Prime Lifestyle Magazine, Cabin Life Magazine and the opening page of the 2016 Market Fact Book for the Spokane Journal of Business.

In 2016 he became FAA certified to fly drones and started another brand called Spokane Drone Photography. Rob has been an aerial camera operator on documentary and television productions for clients including The BBC, Netflix, Investigation Discovery, Nova, and others.

Email or call today and find out how your project can come alive with great photos! Check out the Contact Page for further information or read reviews from other clients.

RL Miller Photography is a Member of Professional Photographers of America (PPA), as well as AIAP, and REPAI

RL Miller Photography is an approved photographer for the Google Street View | Trusted program through a national agency providing service all over the USA.